While many centenarians credited their super healthy habits for their long lives, this lady celebrating her 101st birthday gave thanks to none other than tequila. Iconic. The post Woman Who Turned 101 Reveals That Tequila Is Her Secret To A Long And Happy Life first appeared on Bored Panda. 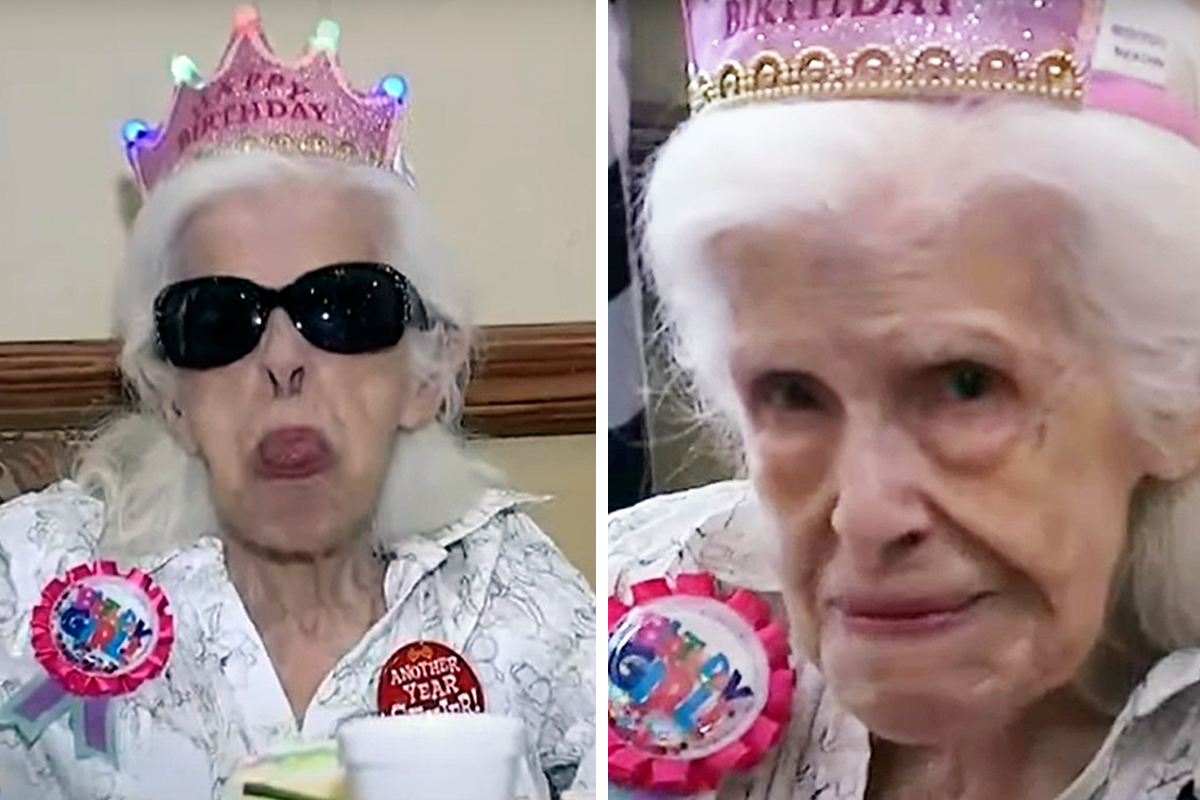 Don’t you want to live forever? I keep asking this question of everyone I meet, getting various different answers. Outliving their enemies and dancing on their graves motivates some to keep trodding on, while others just want to enjoy the present moment, indulging in all the wondrous things life has to offer.

Here at Bored Panda, we’ve celebrated many centenarians, many of whom are great inspirations to each and every one of us. While many have credited their super healthy habits, such as regular exercise, balanced diets, and avoidance of alcohol and tobacco, for their long lives, this lady celebrating her 101st birthday gave thanks to none other than tequila. Iconic.

Today, dear Pandas, we’ll look at different techniques for extending one’s life, as well as some science to give us the answer once and for all—does alcohol really extend life or is there something else we’re missing? Let’s get into it!

Mary Flip celebrated her 101st birthday, revealing the secret to her happy and long life to be tequila! Unexpected, yet iconic nonetheless 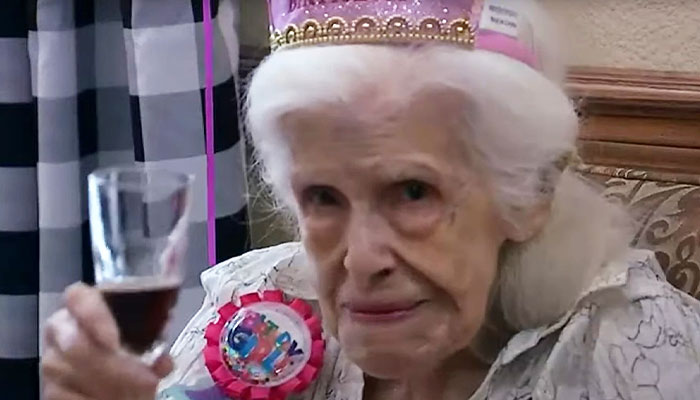 If I had to choose one alcoholic beverage to indulge in for the rest of my life, it would have to be Japanese whisky. There’s just something about it… But 101-year-old Mary Flip of Chandler, Arizona, has chosen the well-beloved Mexican liquor, otherwise known as tequila.

The core component of any good Margarita has been credited as the secret ingredient to Mary’s long and happy life, by none other than Mary herself. After losing her mother and sister at 15, leaving her as the sole survivor of her family, she moved from Chicago, Illinois, to Mexico when she was just 18. There she acquired a love for tequila.

It seems that love hasn’t dissipated, and neither has her sense of humor. “How do you feel, Ma?” Mary Flip’s daughter asked on her birthday, as reported by NBC 15. “With my hand,” she replied, chuckling.

Born in 1921, Mary has lived through the major events of the last century, yet she’s not lost her wonderful sense of humor or her love for the well-loved drink 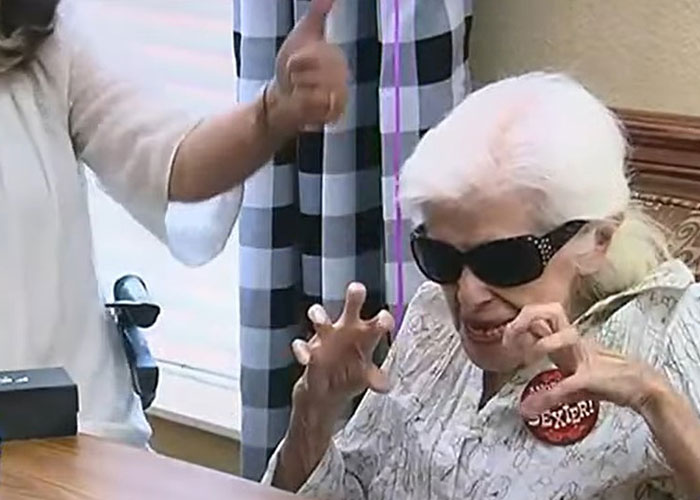 What hasn’t stayed so constant was the last 100 years of human development. Mary, born in 1921, witnessed the Great Depression and multiple wars. She saw the first man land on the Moon and the technological revolution, to name a few, all while bringing up 6 children with her husband, who she met shortly after moving to Mexico.

They led a quiet ranch life for a little while, but as Mary fell pregnant with their first child, they decided to move back to Chicago. She changed careers and became a reputable artist, recognized by the Chicago School of Art.

“I really like to draw. And I was able to figure out that things change even as you’re drawing them,” Mary told NBC 15. “So, I was able to develop and make them look real. It took time but I had nothing else to do except raise a bunch of kids.”

After losing all her family at 15, Mary moved to Mexico at 18 and fell in love with both tequila and her husband, who she met shortly after moving 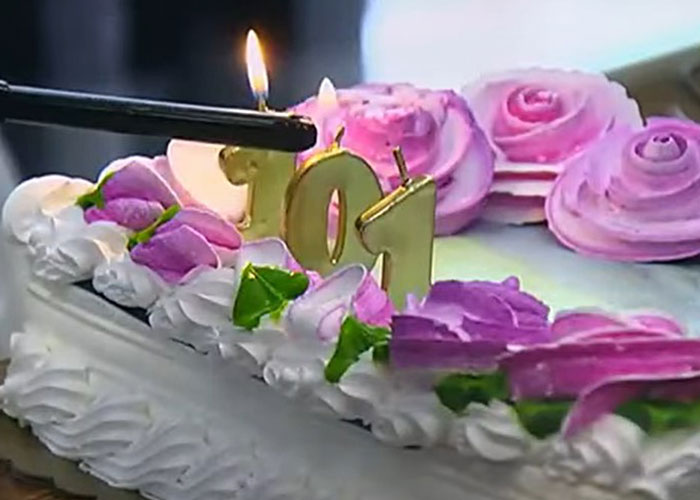 While speaking to reporters, Mary celebrated her 101st birthday in style, surrounded by friends and family, as well as treating herself to a pint of Guinness. As her loved ones danced around her in cheerful glee, she joked: “Oh, I’ll get up on the table!”

Mary isn’t the only one that credits her long life to an alcoholic beverage. The world’s oldest woman Lucile Randon, known as Sister Andre, who turned 118 in April, told news outlets that a wine a day has kept the doctor away. Her carer provides her with a glass of wine at each breakfast and morning mass.

The staff member at Sister Andre’s care home said: “Her glass of wine maintains her and is perhaps her longevity secret. I don’t know—I don’t encourage people to drink a glass of wine every day!”

They lived a quiet life as ranchers until Mary fell pregnant with their first child. The pair moved back to Chicago, where Mary started her artistic career 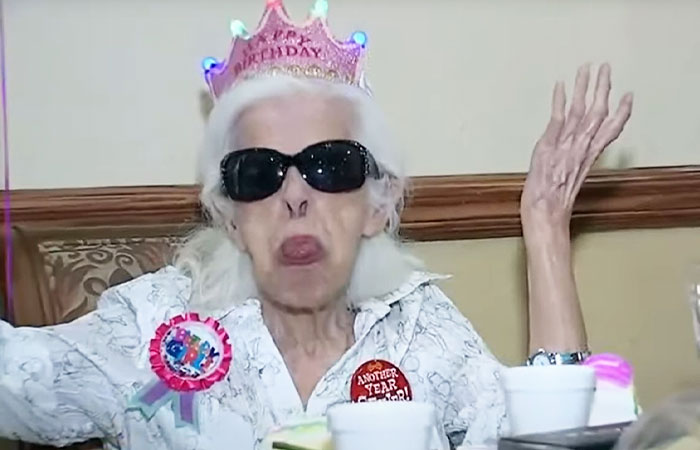 Researchers and scientists have also disagreed on that front, with some arguing that regular and moderate alcohol consumption does in fact increase life expectancy, while others state the complete opposite.

The Netherlands Cohort Study, conducted by Piet A van den Brandt and Lloyd Brandts in 2020, revealed statistically significant positive associations between moderate alcohol intake and the probability of reaching 90 years in both men and women. Overall, the highest probability of reaching 90 was found in those consuming 5-15g of alcohol daily when compared with abstainers.

Her work was recognized by the Chicago School of Art, but she joked: “I had nothing else to do except raise a bunch of kids!” 6 of them to be exact 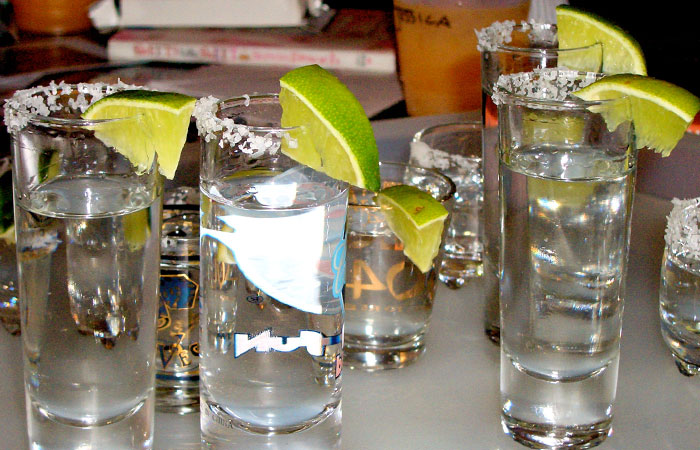 Now hold your horses, there are studies that found that regardless of moderation, regular alcohol consumption leads to a decrease in life expectancy. Yen-Tze Liu and his team found that the potential gain of one year of life by modest drinkers was erased by a two- to fourfold increase in oral and esophageal cancer and that drinking beyond a modest amount led to a large loss of life expectancy.

The National Institute on Alcohol Abuse and Alcoholism (NIAAA) reports that about 95,000 people in the US die each year from alcohol-related causes, making alcohol the third largest preventable cause of death in the country. The CDC notes that prolonged alcohol use may lead to a higher risk of chronic diseases and liver damage, as well as problems with learning, memory, and mental health.

It seems like all things in life revolve around finding the right balance. The Thunder Bay District Health Unit (TBDHU) notes the three aspects of a balanced life: Be Active, Eat Well, Be Yourself. ‘Well, duh!’ you may be thinking, but the way they approach it is quite different.

Surrounded by family and friends, Mary commemorated turning 101 with a pint of Guinness. May many more years of happiness follow! 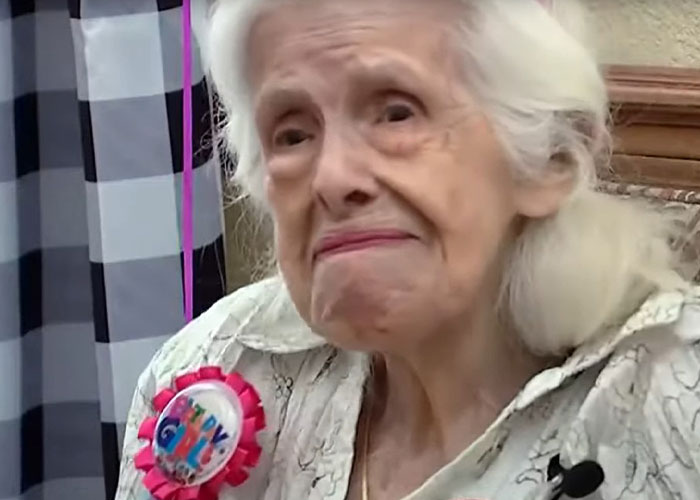 Rather than focusing on being active to change one’s body weight or shape, following restrictive or unsatisfying diets, being self-critical, or doing anything for the reason that you should be doing it, they focus on one’s enjoyment of self. Like taking joy in feeling your body move, realizing that all foods can be part of a healthy diet (yes, alcohol included), and accepting yourself as you are first and foremost.

As long as you’re leading your life with love for yourself and love for others, go and enjoy your life to the fullest! Have that glass of wine or shot of tequila! It’s the little moments of everyday magic that make life worth living till you’re 100.

We wish Mary lots more years of happiness and humor! Let us know your thoughts on this story in the comments below, and don’t forget to upvote for more uplifting stories to appear in your feed! Goodbye for now!

People have absolutely loved this iconic woman and her humorous ways. Let us know your drink of choice, as well as your thoughts, in the comments below! 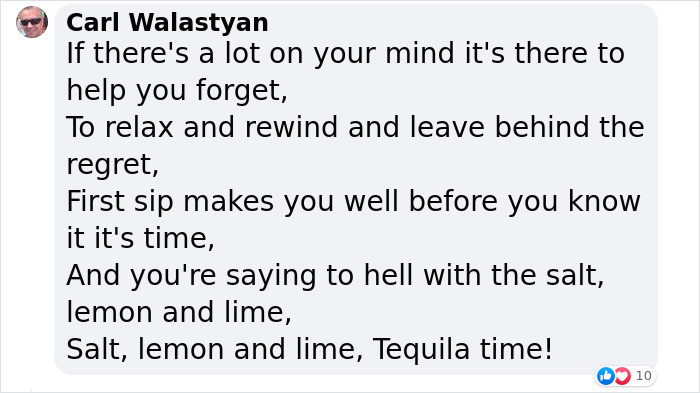 The post Woman Who Turned 101 Reveals That Tequila Is Her Secret To A Long And Happy Life first appeared on Bored Panda.

This Online Page Shares Memes To Send To Your Friends To Radicalize Them, And Here...

“History For The Witty”: 81 Of The Funniest Memes Shared...

30 Giveaways That Someone Is American, As Described By...

“Accidental Surrealism”: 72 Of The Most Surreal Things...

“Take My Money!”: This Online Page Is Sharing Products... 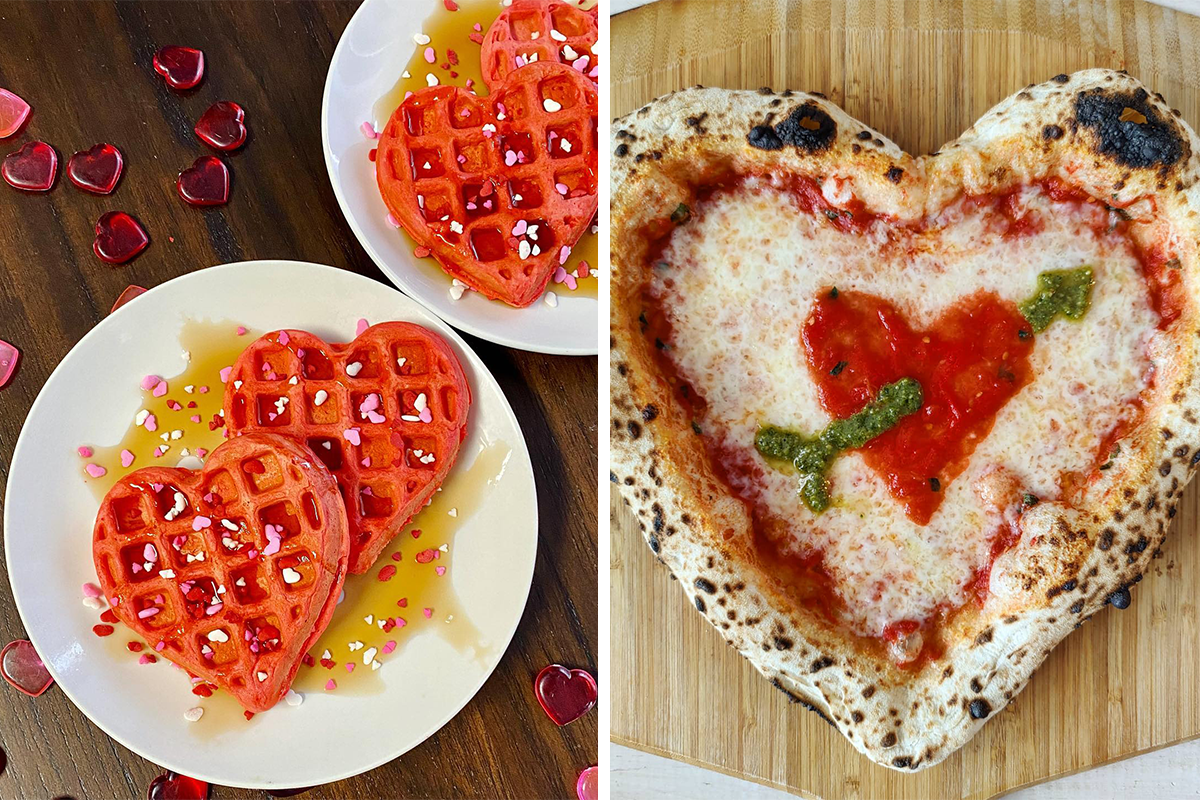 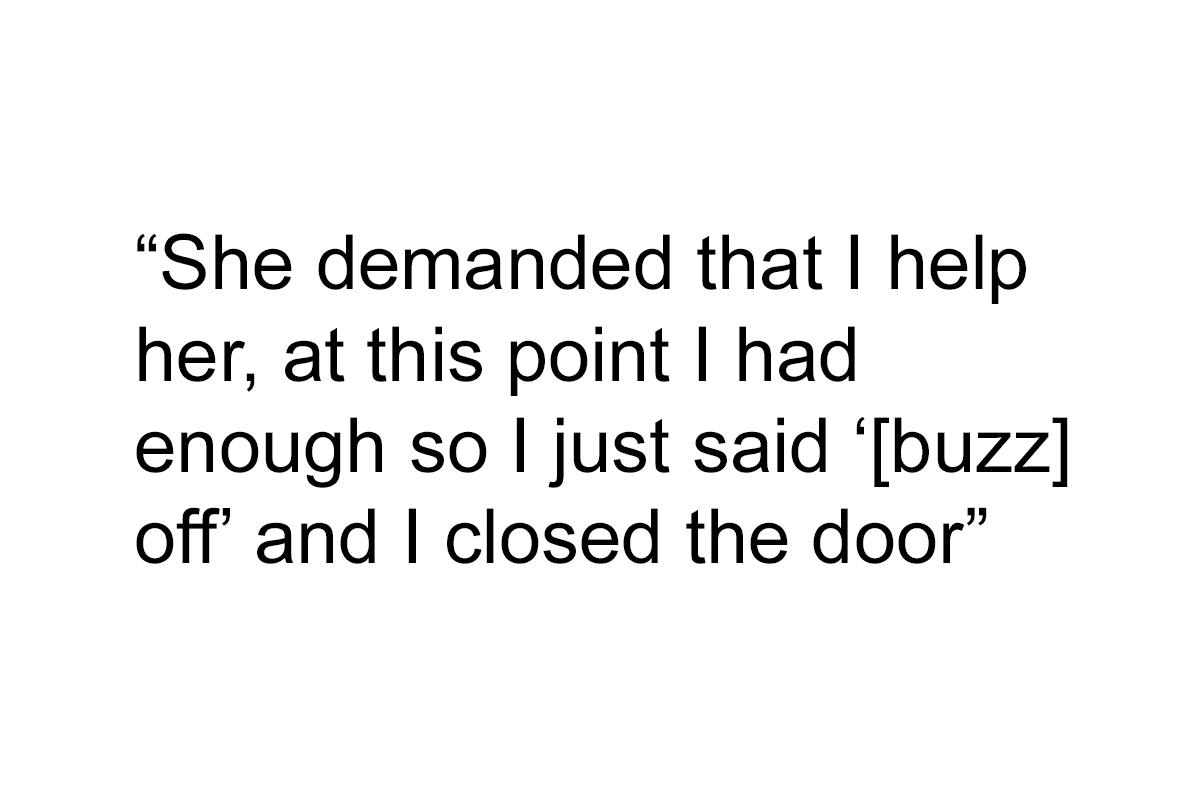